It’s about time something happened with this About-page!

For months and months I’ve been trying to write something about myself, but since I actually don’t understand myself better than anyone else, that has proven to be an impossible task. So I’ve decided to go for another approach and give you a little insight in the Making of Happysad (or any other cartoon for that matter). 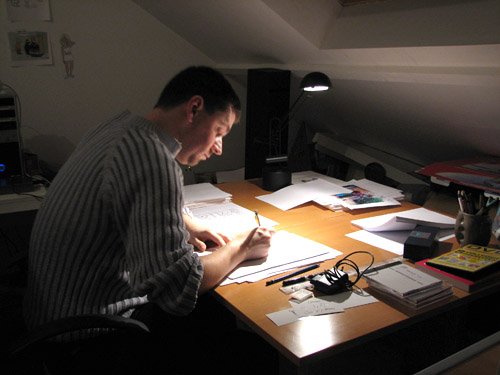 So this is me, doing some preliminary magic on paper. I’m just sketching out a few ideas. Some of them suck and are sent to cartoon hell in an instant, but being the genius that I am, most of them are simply brilliant. I know, I can’t help it either.

Notice the fact that I have consciously chosen to create my artwork in my dark and messy attic room. As a tortured artist I feel obligated to go along with the Bohemian cliché. Too bad it’s not raining through the roof and the place isn’t infected with rats. 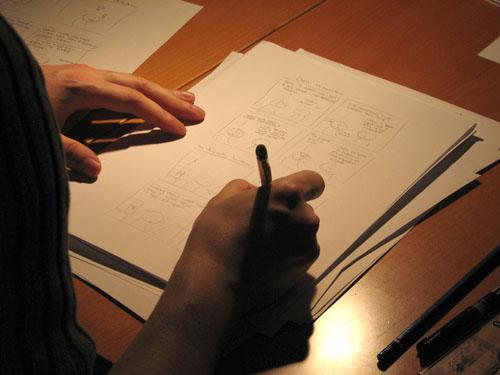 So most of the time I begin by scribbling a few ideas on paper. Here I’m sitting at my desk, but inspiration may strike anywhere. I’ve been inspired in places you wouldn’t believe.

Talking about inspiration, this might be a good opportunity to adress the frequently asked question of: “How do you make up this stuff??”. Well, to be perfectly honest, I couldn’t tell you. I just go along with whatever the funny voices in my head tell me. Although I have to admit that reality often provides stuff you just couldn’t make up. Once you’ve chosen to draw cartoons about women, (unrequited) love and the silly things men tend to do, it’s like shooting fish in a barrel.

Anyway… on with the show. 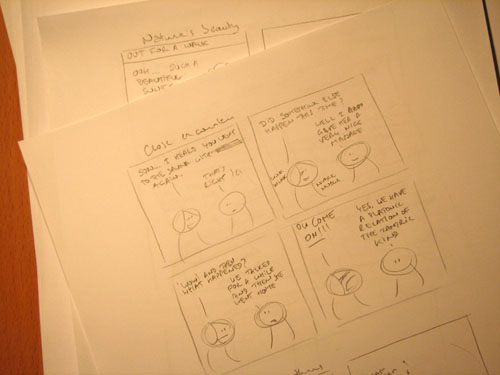 Now here’s a scoop! This is the sketch I made for a Happysad cartoon that is yet to be published, in about two weeks from now. Unless, of course, you’re reading this stuff sometime in the future, and this is all old news. Tell me, what’s the future like anyway? I’m guessing it kind of sucks, right? 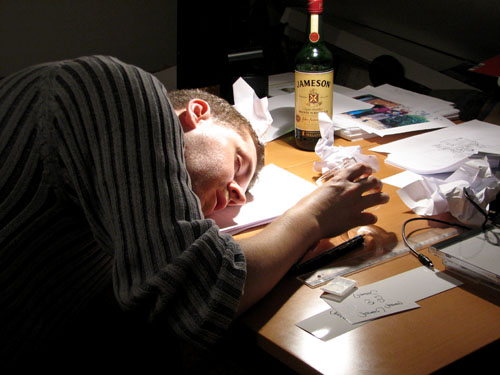 Well drawing the Greatest Cartoon On Earth is no pickle either! Sometimes it’s really difficult to come up with new stuff, but that’s exactly why The Flying Spaghetti Monster in the sky invented the divine liquid called Jameson! It doesn’t make you more creative but you just don’t give a sh*t if you aren’t. 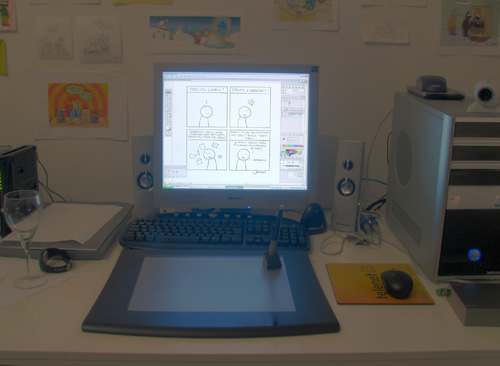 So when all is said and done, it’s time to put this puppy online. Firstly, however, the shizzle has to be digitizzle, and that’s why I need my cheap-ass Aldi/Medion pc (love it), my Wacom Intuos II A4 drawing tablet (without a doubt the very best purchase I’ve ever made in my life) and Adobe Illustrator (and Photoshop for the finishing touches).

When it’s all finished, I upload the whole thing and publish it on my WordPress blog. That’s where YOU come in. You see the cartoons, you recognize pretty much everything that’s ever happened to you in your own love life, and as a sign of appreciation, you donate a sh*tload of money using that fancy PayPal donate button on the right. What, you haven’t? Really? No worries, it can happen to anyone, I’m sure. I’ll just give you a minute…

See how easy that was? Great, put that credit card back and check this out: 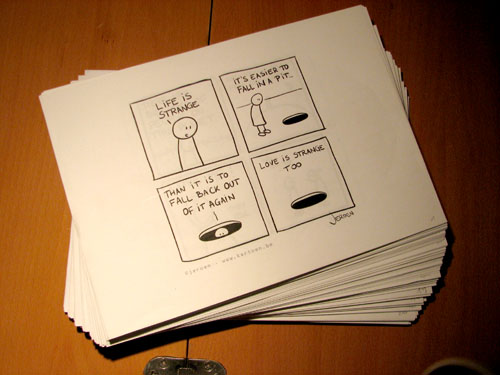 So this is basically it: over 250 Happysad cartoons so far. Some of them you haven’t seen yet. But my guess is that most of Happysad, I haven’t seen yet myself. The best is yet to come.

Stay tuned, and thank you for your visit!

***UPDATE July 2012: I wrote the above text in July 2008, so four years later a small update is in order. Basically I’m still working in the same way, but the old pc has long since been replaces by a shiny iMac (twice, even), and the Happysad cartoon count went up to over 1400 in the meanwhile!