I know it’s been a while since my last post, but to make up for the wait, do I have a lovely story to tell you.

So yesterday one of my best friends, Jo, visited the Belgian Comic Strip Center, together with his girlfriend Ann and a few family members. The visit, including a guided tour, was a gift from Ann for his 40th birthday (yes, another one bites the dust…). Jo is a really big comic book fan, so it seemed like a fun idea for a nice day out. Nobody told him it was a TRAP.

Because little did Jo know that Ann had contacted me some time ago with a very special request. She had asked me to draw a caricature of the both of them, which – in further conspiration with the nice people of the museum – would be put up on the wall, next to all the other, uhm, works of art. And so this is what he got to see at the end of the tour: 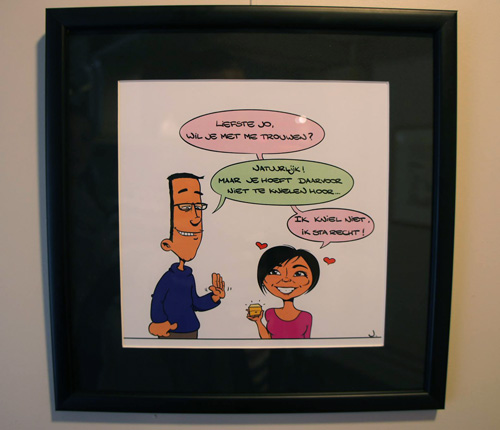 For those of you who don’t speak Dutch, this is what it says:

“Dearest Jo, do you want to marry me?”

“Of course. But you don’t have to kneel down for that!”

“I’m not kneeling down, I’m standing up.”

That’s right, this was her devious way to propose to him! Confronted with such surprising originality, Jo of course had no other choice but to say YES. Har har.

Best. Cartoon. Assignment. Ever! :-)  The best of luck to the both of them!

(By the way, in case you didn’t get that, the kneeling joke refers to her eh, limited height.)