Believe it or not, but some crazy people have managed to get so addicted to Happysad, that they viewed ALL the cartoons in one go after they discovered them. Because this blog format is not the easiest way to do so, I created the Happysad archives on www.happysad.be, which offers slightly less crappy navigation. Now there’s yet another option. You can download all Happysad cartoons in one large zip-file (35 Mb!), right here:

What you will get: 990 gif files, in chronological order. Yes this means about ten cartoons are missing, and I have no idea which ones. Sorry.

What you’ll be missing: the titles of the cartoons, which many times do add to the content of the joke. And, of course, all of the comments. 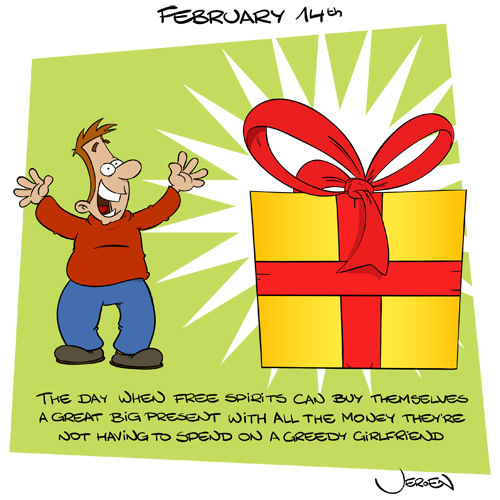 So two of my dearest friends had babies last week. The girl who made a few Happysad appearances as “the nice ex-GF” had twin boys, and a few days later another couple of friends had a boy too. Visiting them both in the hospital left me, well, a bit confused. You see, I actually don’t like kids. Whenever I hear someone talking about their kids (as parents incessantly do, for lack of a social life), I feel relieved I don’t have to put up with all the crying and the whining and with all the sleepless nights and the endless cleaning up of snot, shit, puke, and randomly spewed around foodstuffs. When you’re finally discharged from diaper duty, they turn into these noisy little brats with ADHD, already preparing to become sulky teenagers who will antagonize you in any way they can. And you’re stuck with them 24/7 – it’s not like you can put them back. Moreover, whenever I look at the state of the world today, I’m becoming more and more convinced that the end is nigh, so putting new souls on this doomed planet just feels like it borders on child abuse.

I can’t help but think about my goal in life. What’s my purpose of being here? And what will be my legacy? Sure, I have my job, I have produced a few moderately succesful cartoons, I have a house and lots of stuff… But all this seems trivial in the light of eternity. I’m just muddling on from one day to another, aimlessly, without an overarching ambition. There is nothing that transcends myself, that is greater than just me. So that’s why I am starting to understand why people are inclined to put up with the piss and the puke and the snot that come with having children. Maybe kids are the big missing piece in the puzzle. Despite everything.

So does that mean I suddenly want to have kids ASAP? Hell no. But the case is moot anyway, since I’m not going to make any children all by myself, now am I? In stead, here’s an illustration I had the honour to make for the birth announcement card of one of these new kids on the block: